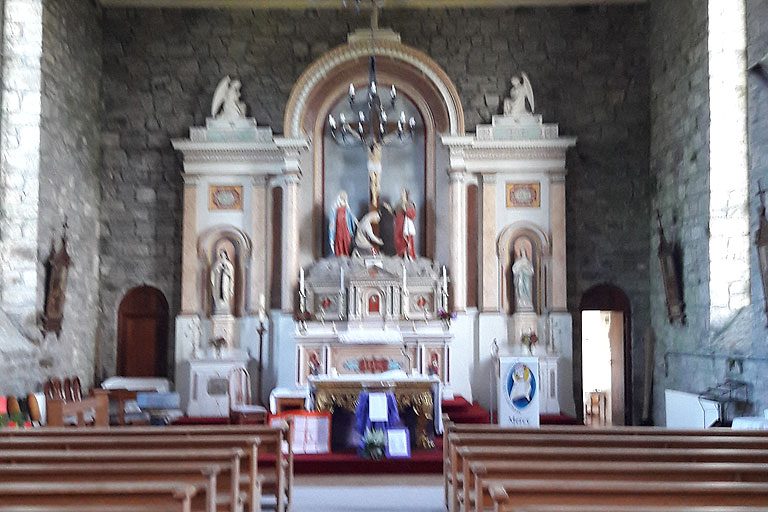 THIS AREA IS REFERRED TO IN 1500 as ‘TALBOTISTON’

The name of Talbotstown derives from the Talbot Family and dates from the 13th century.

The Church of St. Brigid is a substantial structure built of granite, with a front of fine-cut blocks featuring six pillars. Three doorways allow access, two to the nave and the central one to the organ gallery. The porch has rounded stone arches, a feature repeated in the side-windows and the pillar-supported arch over the old altar.

A modern altar has been positioned facing the people. The organ came from the Presentation Convent, Carlow, in the early 1990’s. The present church replaced the church of St. Brigid at Englishtown. The bell of the old church was installed in Talbotstown. The Holy Water Font from the old church went to St. Joseph’s in Baltinglass.

Internally, the striking features are the high walls of exposed stone which support a beautiful ceiling painted by Grispini, an Italian artist who also worked on Humewood Castle, Kiltegan.

The stonework was pointed in 1974 and following the storm in 1997 new windows were installed. The church has never had stained-glass windows.

The locality is dominated by Humewood Estate.

The Wicklow rebel Michael Dwyer of Imaal was arrested near Humewood Estate in 1803.